Why Whodunit Did It

I’m collaborating with several other Second Wind Publishing authors to write a series of novels online. The first novel is about the death of a little girl. Her body was found in the desert outside a bedroom community that once had been a working ranch, hence the name of the series, Rubicon Ranch.

Collaboration is a bit of an over-statement. Rubicon Ranch is more of a cross between a round robin or campfire tale, with each author taking turns adding to the story, and a role-playing game. We each create and control a POV character, show who s/he is, what relationship s/he has with the deceased, and why s/he might want him dead.

I have it easy --- my character, Melanie Gray, is a photographer/writer who wanders the desert taking photos for the coffee table books she used to write with her dead husband. (He wasn’t dead when they were working together, of course.) He died in a one-car accident while texting his mistress, though there are suspicious circumstances leading investigators to think that perhaps he was killed. Melanie has a talent for finding strange things in the desert, such as the child’s body stuffed in an abandoned television console in the first book, and the scattered body parts that will be found in the second book. This is all that leads the sheriff to suspect her.

The other characters, however, have to simultaneously prove that they are the murderer, yet also have a plausible explanation for why they acted guilty if they weren’t the murderer. (That’s because we don’t know whodunit until all the end of the book. So not only do readers of the ongoing story not know who the villain is, neither do we.)

In the first book, the authors solved the problem of simultaneously setting their characters up to be murderers while allowing for the possibility that they were innocent by giving their characters psychological or physiological problems, such as sleepwalking, to keep the characters themselves from knowing if they were the killer.

So how do you write a character from a strict third person limited point of view, from inside the character’s head, proving that your character is the killer, while at the same time giving yourself an out if the character turns out to be innocent?

Well . . . If your character has killed before, you can have him/her worrying about if the sheriff will find out what s/he did, without being specific as to which crime s/he is wondering about. You can have your character act guilty --- perhaps desperately trying to cover something up. You can have him/her try to pin the murder on someone else, offering assistance to the sheriff, which would make your character seem guilty, but in the end (if your character is not the killer) have an alternate explanation. You can be hiding something in your house that can be construed as your having Morris's body that you're cutting up bit by bit. I'm sure you can come up with better ideas than these, but you get the idea.

I’m looking forward to seeing what the other authors come up with.

Pat Bertram is the author of Light Bringer, More Deaths Than One, A Spark of Heavenly Fire, and Daughter Am I. All Bertram’s books are available both in print and in ebook format. You can get them online at Second Wind Publishing, Amazon, B&N and Smashwords. At Smashwords, the books are available in all ebook formats including palm reading devices, and you can download the first 20-30% free! 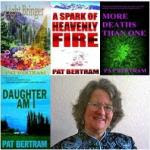 Sounds like a very fun and interesting challenge. Good luck with how everything turns out.

I was fascinated to read this. It really sounds like an intriguing project. Keep us posted on how it goes.
Gwynneth White
http://todayinshenaya.blogspot.com

Thank you for your comments. Yes, this is a fascinating project. I'm learning a lot about story telling and about how authors write.