At this time year, how can you not help but reflect on the past twelve months and ponder where you’d like to be twelve months from now? For me, the year was more challenging than most, but in a good way, one that I created. In 2014, I learned how to juggle a full-time day job with publisher deadlines, promotion, bookselling events, and more writing. It was quite a juggling act but I survived. By doing so, I answered a question I’d been asking myself for a long time. Did I have the energy, drive and management skills to incorporate a nine-to-five job with my writing life? The answer is yes, but not without obstacles, days of sheer exhaustion, and lowered productivity. This year, I’m aiming for a long-term, part-time job in what I hope will be a perfect balance.

One of the things I kept up with in 2014 was to read my favorite blogs, one of which is Kristine Kathryn Rusch’s and the other is Russell Blake’s. Rusch wrote a fascinating piece reviewing 2014. Blake’s lastest blog makes some interesting predictions for 2015, referring to events that occurred this year. Both of them agree that 2015 will be harder for writers to earn a living for numerous reasons. You can read their blogs to understand why but the two things that jumped out at me were the introduction of Amazon’s Kindle Unlimited program in the summer (which has ultimately slashed most writers’ incomes) and that traditional publishers are finally learning how to compete with indie publishers by lowering the price of ebooks.

Here’s the other thing: change is a constant in the publishing/bookselling industry. Authors have changed publishing strategies, booksellers like Amazon are changing selling strategies, and readers are changing book buying habits. The giveaways and $.99 price points that worked in 2011 and 2012 don’t work nearly as well for indie authors. As Blake points out, better author branding will be essential for authors to succeed. And as Rusch points out, writing, publishing, selling, and staying successful is so hard that she calls 2014 the year of the quitter. Rusch says that a growing number of writers are no longer in the biz for a variety of reasons which she lists in her blog. Although Blake also notes that 2015 will be harder than the previous year for many authors to earn a living, he still finds this an exciting time to be a writer. I couldn’t agree more.

Yes, more change is coming. I can feel it in the wind in my own writing/publishing/selling life. But does it frighten me? Hell, no. It’s absolutely invigorating!

Until next year,
All the best,
Debra 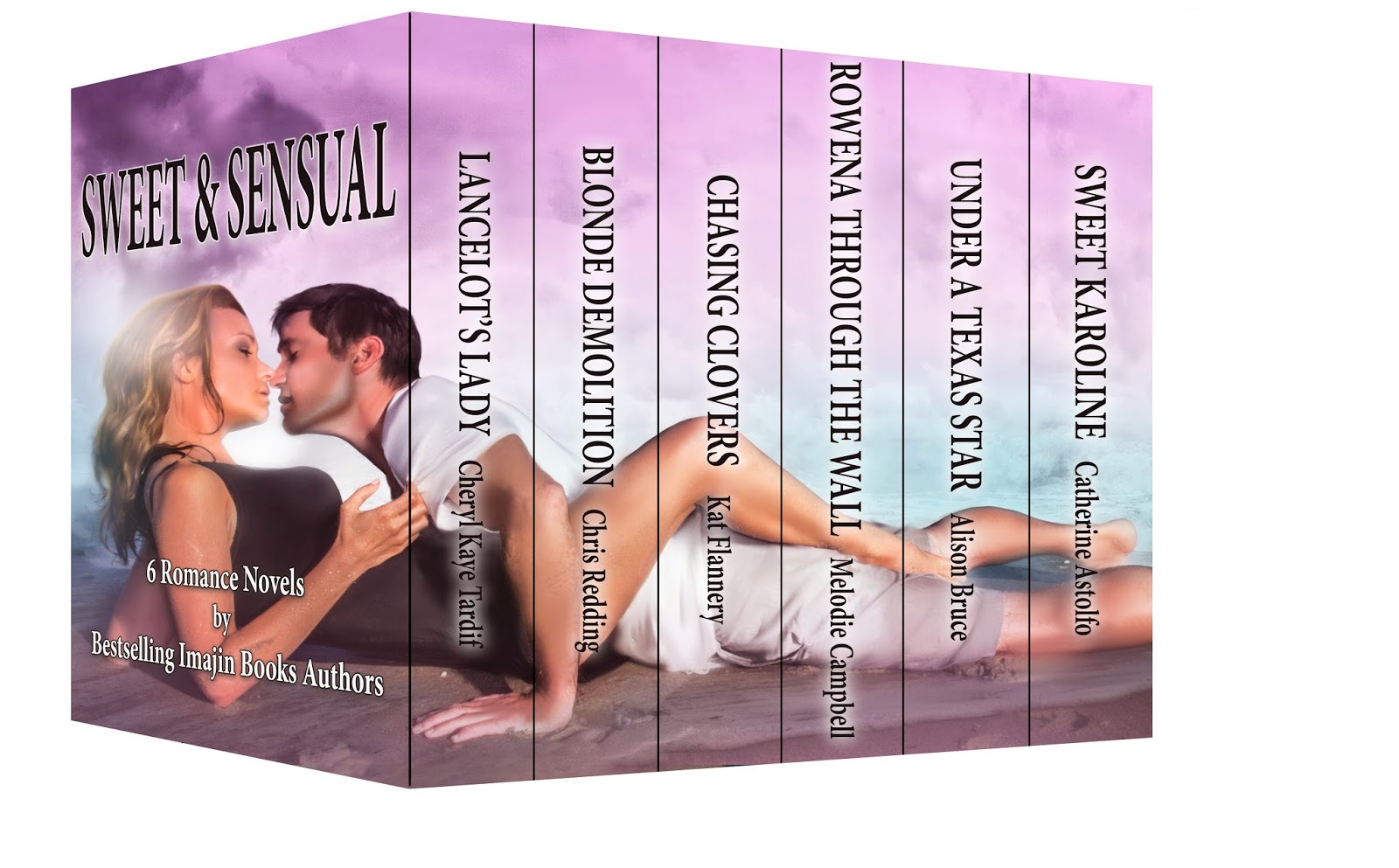 Need a little romance in your life?

With a list price total of nearly $24.00 US and over 340 reviews on Amazon.com, SWEET & SENSUAL is a value-packed romance bundle of complete novels that takes you from romantic suspense to historical romance to fantasy romance all set in captivating worlds that will leave you wanting more.
Posted by Cheryl Tardif at 4:25 PM 0 comments

From the start of the ebook revolution, piracy has been a thorny issue for authors. Some are outraged while others feel that it has increased their visibility and ultimately helped boost sales. I recently read an interesting piece in WritersWeekly, where site owner, Angela Hoy, answered a writer’s question about whether to worry if her book had been pirated.

Hoy maintains that there are far more honest book buyers than dishonest ones, and that people who choose the illegal route probably wouldn’t pay for a book anyway. Hoy also runs a publishing service and maintains that ebooks are still profitable for her business, despite piracy issues. In fact, she says she has little piracy problems as she doesn’t put any security on a book. After all, hackers have the capability to quickly break codes. Secondly, Hoy states that secure ebooks are not available to blind readers which is discriminatory and subjects her to lawsuits.

In an earlier article, Hoy writes that many of those websites that list an author’s ebook for free are overseas operators who don’t actually have the book. They obtain the title, ISBN, price, etc. from other sources, then list it on their site to entice people there. When would-be customers try to download a copy of the book, they wind up with some sort of malware in their computers.

While Hoy may not be overly worried about piracy, law enforcement agencies certainly are. Some of you probably heard that authorities recently shut down the huge, Stockholm-based site called Pirate Bay. The site has been on law enforcement’s radar for some time and has been in and out of court for nearly a decade to fight for the right to exist. However, authorities were finally able to shut them down through copyright infringement laws. As the Dec. 13th Yahoo article says, this success will not stop the piracy trade. Incidentally, one of Pirate Bay’s owners claims he doesn’t care that they shut it down, implying that he has other means of keeping himself busy. Hmm. If that was true, why did he battle so hard with the courts to keep the site going in the first place? Let’s be honest. The issue won’t likely go away, but at least we can decide how we’ll respond to it.

Why I Stop Reading -- reblogged from MarianAllen.com

As a writer, I'm interested in why readers stop reading. Since I'm an avid reader, I decided to ask myself. Here's what I answered:

There are many reasons why I stop reading, and they sort of have a pecking order.


Why I stop reading on the first page:

Why I stop reading later:

Why I stop reading at any point:

Why I want to stop reading, but don't if none of my other buttons have been pushed:

That's all I can think of right now. It's surprising how many books I don't stop reading, actually. But life is too short to read irritating books. Unless there's something really, really good about them.


What can redeem a book I want to stop reading?

I was recently asked to name three of my favorite books. They were:
So now you know.

This week, Amazon released the year’s bestselling titles in a couple of different categories. With the rise of the indie author and the growing number who are make a living from their work, I thought I’d see more of these authors make Amazon’s top twenty, overall bestsellers list. Instead, I found a significant percentage of traditionally published names who were top selling authors before the indie revolution. Names like John Grisham, David Baldacci, Diana Gabaldon, Lee Child, James Patterson, Ken Follett, Stephen King, and Rick Riordan, for example.

I took a look at the top twenty list in Kindle sales and found some of the same names plus Janet Evanovich, Michael Connelly, and Nora Roberts. As Amazon notes in its media release, some of these names made the 2013 list and Grisham is on the list for the fourth year in a row. A quick look at the prices revealed that most of the titles were between $6.99 and $9.99. Very few were in the $3.99 price range.

So, what does this mean? I guess it depends on how you look at these things, but it does seem clear that fans of these writers are sticking with them. Despite the growing prestige and sales of indie writers, they aren’t yet reaching the top rung of the ladder. I suspect that some are undoubtedly close, and it’s highly possible that E.L. James, author of Fifty Shades of Grey, made that list last year. I haven’t checked. I’m wondering if, in a few short years from now, indie authors will dominate Amazon’s bestseller’s list. Now that would be quite a feat.

About a decade ago, I was a member of Sisters in Crime (SinC) a U.S. based organization that welcomed both men and women writers, and supported chapters in different cities as well as a few countries. Their mission, as I recall, was to support and raise the profile of female crime writers. You see, surveys showed that the ratio of men and women crime writers was about equal, however, SinC’s monitoring of newspapers all over the U.S. revealed that far more men than women were being reviewed. Part of the issue was that some newspapers had more male reviewers on staff. The other issue was that more men wrote thrillers, and gritty, noir crime than cozies, and cozies did not interest male reviewers. SinC took this matter so seriously that they wrote to some of the papers pointing out the discrepancy. A few of the papers attempted to rectify the situation.

I let my membership with SinC lapse and didn’t give the issue much more thought until an article this week in Time stated that reading habits appeared to be gender specific. Men preferred to read work by male authors while women preferred to read female authors. The data was based on a poll taken from 40,000 readers from the large Goodreads.com site.

The article also noted that a yearly analysis conducted by Vida: Women in Literary Arts, showed that the reviewers in the top publications were predominantly male. It seems that nothing has changed over the last decade, despite the efforts of SinC and others.

Quotes from female authors in the article noted that publishers tend to package women’s work in a more feminine style instead of giving their books a gender neutral appearance. In earlier decades, women writers didn’t use their own names for fear that they wouldn’t find a publisher. Even in the latter part of the twentieth century, I recall reading articles suggesting that female science fiction writers use their initials or a pen name. Have things changed? A little, but not nearly enough for some women writers.

Although more women are writing thrillers and noir fiction, the majority still appear to be writing fun, light cozies. Let’s be real here, men shouldn’t be forced to read what they don’t want to any more than women should be. For that reason alone, I don’t think the deeply entrenched gender preferences will ever change. As a woman writer, if I want more recognition, I’ll join the ranks of gritty, thriller writers, use a pseudonym and launch another series. But I’m not going to waste time complaining about gender inequality. I’m far too busy writing stories for anyone who wants to read them.