I love collecting quotes, and one of my favorites comes from an excerpt in a Writers’ Digest Magazine article years ago. I’ve kept the quote pinned to my bulletin board for so long that the paper’s yellowed. Here’s what it says:

Rejection is a writer’s best friend. “If you are not failing regularly,” Gregg Levoy observes in ‘This Business of Writing’,” you are living so far below your potential that you’re failing anyway”.

This statement still hits me in the gut.

Over the years, I’ve tried to analyze and define what success and failure means to me in terms of my writing life. I’m still working on it. So far, my only definition of failure is to quit before my most important goals are achieved. Believe me, there are days when I’ve been tempted.

Last week, I read an interesting blog called “The 7 Differences Between Pros and Amateurs”. The one that jumped out at me is point #5, "Amateurs Fear Failure. Pros Crave It." The piece goes on to say that failure can teach you more than success ever will. When it comes to writing, publishing, and promoting, this is completely true.

I learned a long time ago that rejection or lousy reviews or poor sales is a part of many writers’ lives. But embracing those disappointments and learning from them is crucial. So this year, I’m planning to take more risks by asking for more reviews and guest blogging opportunities. I’m going to take more chances on new marketing and selling opportunities. Because if I don’t try, I’m failing anyway, and that’s not going to happen.

“Feeling sorry for yourself, and your present condition is not only a waste of energy but the worst habit you could possibly have. – Dale Carnegie.

“Success represents the 1% of your work which results from the 99% that is called failure.” – Soichiro Honda

Who's Telling This Story, Anyway?

The other kind -- and the kind we were talking about -- is narrative point-of-view, as in who tells the story, no matter what grammatical person you use.

The foremost example is probably the Sherlock Holmes stories. Holmes is the main character, and has all the action and most of the best lines. Yet the stories are better, told from the point-of-view of his sidekick. We wouldn't be astonished at Holmes' brilliance, if we were inside his head and knew what he knows and followed his inferences and deductions all along.

If you have a book or a story you can't get moving, try writing a scene from the point of view of a different character. Maybe a character you thought was just a bit character needs to be more important. Maybe the whole book is actually about what you thought was a minor sub-plot.

Alice Friman, one of my favorite poets, said that everything you create is a thread that's attached to something in your subconscious. Sometimes what that thread attaches to isn't what you think it attaches to. Sometimes switching out plot lines and narrative characters can sort out what you really want to say, as opposed to what you thought you wanted to say.

It's worth a try!

Email ThisBlogThis!Share to TwitterShare to FacebookShare to Pinterest
Labels: point of view, the writing process

The Lazy Way to Publication 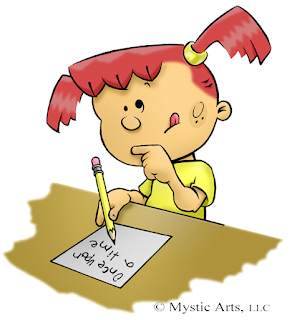 Over the years, I’ve been approached by a number of people who want me to write their story for them…and find a publisher, oh, and maybe an agent. The conversation always comes down to “You do it and we’ll split the royalties.” Honestly, I’m not sure I can hide the chagrin on my face anymore.

These people might have taken the occasional writing course or joined a critique group just long enough to sense how daunting writing a book can be, never mind selling and promoting it. Sometimes, the wannabe author is someone I’ve met socially, or while selling my books, or through a friend.

I call this the lazy way to getting published. Now, let’s be clear. I have nothing against someone wanting to hire a ghostwriter, and I often recommend reputable publishing services to others, but I would never take on the project myself. In fact, I’m highly suspicious of people who want to get from point A to Z without doing a shred of the leg work required, or who refuse to spend a single penny on a good editor, or writer, for that matter.

I’ve given workshops that outline the importance of having a social media presence, and offer simple how-to tips, only to have the occasional attendee say at the end, “I don’t really have to do all that, do I?” Of course not, provided they don’t want to sell any copies. My answer is a bit more diplomatic than that in person, but it amounts to the same thing. If you don’t invest in your idea without doing your homework and spending some dollars, then you won’t get far.

There’s a lot of nice people out there with great stories to tell, but it’s a slippery road to hell to commit your time and skill to someone who doesn’t understand what it takes to write, publish, and promote a book.

One of the Worst Writing Tips I've Heard

One of the more common writing tips I’ve heard throughout the years is to make sure the protagonist in my books is likable. This is particularly applicable to female protagonists. The consensus was that if readers don’t like her, they’re going to put the book down. So, I’ve worked hard to create at least somewhat likable characters over the years, albeit still flawed.

I’ve come to realize, though, that likability is a matter of reader taste, and to some degree, genre. I write mysteries, which offers a diverse spectrum from light cozies to noir thrillers. Generally, (and of course there are exceptions) cozy readers prefer a likable protagonist who isn’t an alcoholic or drug user. Thriller fans prefer a protagonist who doesn’t spend her afternoons drinking tea with a cat on her lap.

I write amateur sleuth mysteries, which incorporates dark and light worlds, so it can be a bit of a risk, as I might not please either group. Still, I feel compelled to write books and create character that are meaningful to me. All readers bring their experiences, biases, and preferences to the table when it comes to books, and that’s fine. The truth is that no writer will please everyone.

As a writer and a reader, a likeable character isn’t as important to me as a compelling and complex character with a an obstacle to climb or a mission to accomplish. It can be small or global, but it has to matter to the protagonist.

I came across an interesting a piece in Bookriot a few days ago, called ‘100 Must-Read Books With Unlikable Women’. The author argues that female characters are given short shrift by being labeled annoying, among other things. They aren’t allowed the same leeway that male protagonists are, and receive more complaints from readers for their un-likability. Hmm. She might have something there.

I browsed the list to see if there were any mysteries and sure enough, I found Gone Girl and Dark Places by Gillian Flynn. There were also quite a number of mainstream novels. I have to admit, I didn’t browse through the entire list, so I’m not sure if there are any fantasy or romance titles there.

But the author makes a good point: there are plenty of great novels featuring unlikable characters in terrific novels. Really, did you find Scarlett O’Hara likable? I sure didn’t, but this didn’t stop me from enjoying the story. In fact, Scarlett’s unlikability was crucial to the story’s success. So go ahead, write unlikable female characters, despite what some of those writing instructors tell you. Just ensure that you’ve got a memorable, compelling story to tell.

Posted by Debra Purdy Kong at 9:26 AM 0 comments