Thinking of Writing a Novel? There Are Things You Should Know

If you’re a writer who’s actually admitted as much in public, I’m pretty sure that ever other person you’ve met has told you they either have a great idea for a book, or are working on one. With the ease of publishing one’s own work and the highly publicized success stories (few though they are), more people than ever want to write and publish a book. If you know someone like this, you might advise them to think it through a little more. They can start by reading a terrific blog, called 25 Hard Truths About Writing by Chuck Wendig. The blog is funny, caustic and entertaining. Also, a lot of what he says is quite true. Be aware that he drops plenty of F bombs in the piece, so if you offend easily it might not be for you. Of the 25 truths, here are some of my favorites:

As I said, Wendig’s blog is really worth reading, unless you’re easily discouraged. http://terribleminds.com/ramble/2013/01/22/25-hard-truths-about-writing-and-publishing/

Posted by Debra Purdy Kong at 2:18 PM 0 comments Links to this post

I'm pleased to announce that my fantasy trilogy, SAGE, is under contract with Hydra Publications. The editing is done and the first book is out in electronic formats, with print to follow. 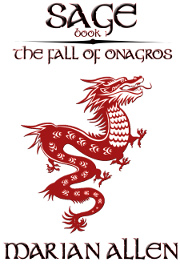 Usurper. Lost Heir. Runaway bride. Land on the brink of civil war. All so familiar, until Tortoise -- the Divine Creature who ignores the rules of right and wrong -- challenges his fellow divinities to meddle.

Suddenly, children targeted for murder are adopted, swordsmen turn into blacksmiths, and none are reliably who or what they seem. The four Divine Animals are afoot: Tortoise, Dragon, Unicorn, and Phoenix. Hold on tight.

Book 1: The Fall of Onagros
In the first book of the SAGE trilogy, a legacy is lost, a woman vanishes into thin air, wisdom is found in unexpected places, and a man hopes to defeat a tyrant with tall tales and gossip.

Available at the Amazon Kindle store and for multiple electronic formats at Smashwords.

Publishing these days truly is a see-saw world. Two of my recent blogs addressed the poor e-book sales from Barnes & Noble, and another discussed an article which claimed that dedicated e-readers could become obsolete. Additionally, a number of sources have been saying that the e-book revolution is slowing down, and that about 75% of all books sold are still sold in print. All ohose articles and sources make good points, but here’s the other side of the coin.

According to an article in Digital Book World, more than half of American children are now reading books on tablets, which is double the portion of adult readers using the devices. Keep in mind that the study DBW quotes came from PlayScience, a New York-based, children’s digital research firm. The study also claims that a third ohe children who read e-books read them more than once a day, and 85% read an e-book at least once a week. If young readers are growing up reading digitally, then the e-book industry will indeed flourish. To read the piece, go to http://www.digitalbookworld.com/2013/more-than-half-u-s-kids-reading-ebooks-new-report-shows/

Another article touting the prevalence of e-books got some attention when an ABC News article reported that a community library in will be going paperless later this year. That’s right, the library will offer nothing but e-books for patrons, along with 100 e-readers, plus a selection of computers and tablets. Patrons will be able to either borrow e-readers or bring their own. Is this how the future will look? If so, I can’t say I’m ready for it. A photo ohe library in the link shows that it looks more like an Apple store than a library. It will be interesting to see ihis experiment works. You can find the article at http://news.yahoo.com/library-without-books-bibliotech-open-193118588--abc-news-tech.html

Posted by Debra Purdy Kong at 10:25 AM 2 comments Links to this post

A few years ago, I remember an agent telling us wannabe authors that self-publishing was the kiss of death. Nevertheless, I self-published Taxed to Death in 1995, a decision I don’t regret to this day as I sold nearly 950 print copies (it still sells), gained some great reviews, and learned the business of promoting and selling.

It’s been both amusing and irritating to read recent blogs by authors who are still being told the same thing by agents. I can understand it from their point of view. After all, an agent’s bread-and-butter is to acquire six-figure contracts on behalf of authors, for which they’ll receive a 15% commission (on average) and hope the large publisher and author do an adequate job of promoting the book. However, times have changed folks. Publishers are looking to the indie authors’ sales rankings on Amazon to decide which new author to invest in these days.

To that end, Amazon recently announced that among its top 100 bestselling authors, fifteen are self-published. According to an article in bookseller.com, at least one ohose authors has landed a six-figure contract. Also, over 61 self-published authors have sold more than 100,000 copies through the Kindle Direct Publishing (KDP) program. Now, before you get overly excited and want to rush your manuscripts into the program, remember this is only a tiny fraction of all the self-published books out there, and most are selling far less than this. The article lists the top ten bestsellers, which you can find at http://www.thebookseller.com/news/self-published-authors-kindle-bestseller-list.html

Prolific author Dean Wesley Smith posted an interesting blog that adds further information to the growing transition from self-publishing to traditional publishing. He writes that according to a piece in Publishers Marketplace, approximately 300 six-figure deals were made in 2012, in all categories of fiction and nonfiction. Ohese 300, forty-five were from self-publishers. Smith ends the blog by saying he doesn’t know why an author wouldn’t start by self-publishing first. There are better royalties, more control, quick information on sales, and no time wasted on waiting to hear from agents and publishers.

Of course, there’s another side to all this. Knowing how to adequately market your book to gain some attention, but that’s a whole other story. To read Smith’s always insightful blog go to
http://www.deanwesleysmith.com/?p=8408

Posted by Debra Purdy Kong at 11:24 AM 0 comments Links to this post

Last week I posted a list oop crime fiction for 2012 from January Magazine. The magazine has now produced a part II to their top crime list. They’ve also completed their best children’s books, cookbooks, fiction, and nonfiction lists, among others, so take a look at them at http://januarymagazine.blogspot.ca for the latest.

A couple of articles this week commented about Barnes & Nobles’ release of sales figures for the Christmas season and clearly, the numbers were disappointing. Both in-store and online sales were down about 8.2%. The sales of Nook readers were down by 12.6%, while digital content sales were up by only 13.1%. While that might not seem too bad, the article also reports that Nook business last year was up by 43%.

The thing is, a lot of Nook readers have sold over the last couple of years, and if you bought one how often do you need to replace it? Not everyone has to have the latest model of e-readers. Has earlier success caught up with B & N, causing a slowdown, or is something else going on?

An article from The Shatzkin Files says there was lower bookstore traffic this season, while the sale of independent books was apparently strong over the holiday season. Indie authors made solid efforts to sell books in print form this year. Also, they aren’t investing money in brick-and-mortar stores, nor spending big bucks to create their own dedicated e-readers like B&N, so profit margins are better.

There’s more in the interesting article, but the bottom line appears to be that bookselling is still a tough haul, even though B&N is the largest chain in the You can read more at http://www.idealog.com/blog/bn-results-are-disappointing-and-one-wonders-if-prior-success-with-nook-might-deserve-part-of-the-blame/

An article in Yahoonews.com, quotes some ohe same stats but makes a more dramatic statement proclaiming that B&N’s e-book sales strategy simply isn’t working. B&N should have been able to capitalize on the closure ohe Borders chain a few months back, but hasn’t. So, the question they pose is this the beginning ohe end for B&N? Will ’s last chain survive when Amazon’s strategy and sales appear to be so much better? Time will tell, to read the piece go to http://news.yahoo.com/amazon-gutting-barnes-noble-143542411.html

Posted by Debra Purdy Kong at 11:00 AM 1 comments Links to this post