I'm pleased and proud to announce a story in the Southern Indiana Writers Group's just-published anthology, APOLLO AND ATHENA WALK INTO A BAR: (ART MEETS SCIENCE). 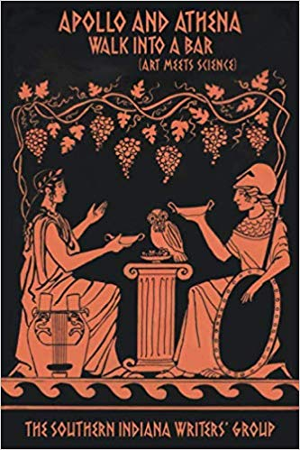 My story is "2619: Prayer", a science fiction story about loss and hope. Samples of some of the stories (including mine) can be found on the Southern Indiana Writers Group website.

The book is available in print and for Kindle through Amazon, or by order through your friendly neighborhood bookstore with the ISBN #1942166621.

I'm delighted to announce the re-issue of my science fantasy novel, previously released as EEL'S REVERENCE, now called THE WOLVES OF PORT NOVO. The book has been long out of print, but not forgotten by fans. I've let it rest, I've run it through a critique group that gives no quarter, and I've made some necessary adjustments, have a stunning new cover, and a far less squiggly title. 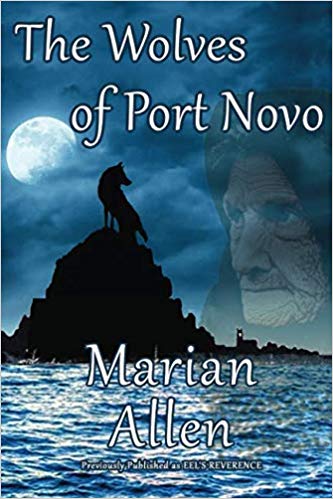 Elderly priest of Holy Sweet Micah, Aunt Libby, leaves her parish in a huff and walks into danger. Not from the tough young mercreature who robs her, not from the pragmatic waterfront restaurateur who gives her the briefest possible shelter, but from fellow priests.

"Reaver" priests, mercenary and cynical, have driven all true priests out of Port Novo and plan to expand their power as far as possible. One old woman isn't going to stand in their way.

Or so they think.

Available through Amazon in print and for Kindle.

I'm doing Story A Day May again this year, writing and posting a story every day on my blog. Today's story is set in the world of Port Novo, and it's about Aunt Libby as a child.

I asked my husband, a retired English teacher, for a subject for today's post, and he complained that people today, generally, read a lot of non-fiction, but don't take fiction seriously.

Fiction, he said, can offer a distilled truth that non-fiction can't.

I find that insightful and possibly the highest strength of good fiction.

He mentioned, in particular, Dickens writing about the plight of the poor in Victorian England. The facts were available, but Dickens took his readers into the lives of the poor. When we read about Little Dorrit, Oliver Twist, or even Fagin, we experience their suffering; we see the prejudices and systemic abuses from their sides.

We can read histories of times and places and know the facts, but a rich fiction can put us there inside a participant.

As he also pointed out, fiction can also harden stereotypes and perpetuate mythologies, but I maintain that only poor fiction does that. Good fiction doesn't deal in stereotypes, but in individuals, who do things that may look stereotypical for true, personal reasons; if they don't, it isn't good fiction.

What do you think?

Email ThisBlogThis!Share to TwitterShare to FacebookShare to Pinterest
Labels: fiction

The company I'm third-part owner of, Per Bastet Publications, received a submission we were eager to see. When I looked it over, I sent it back. We're still eager for it, and the author is willing to do what I asked before we accept the submission for realz, but the contract would already be signed if the excellent author had done one thing before submitting the manuscript.

If you don't have a critique group or a critique buddy, read to the dog or the cat or to yourself, but read it aloud.

As I say, it's easy--so, so easy--to perfect-English your dialog to death. Reading aloud will go a long way toward teaching yourself to avoid that, if you read what you've written and not what you think you've written.

That's my two-cents'-worth on the subject. What do you think?

Pretty much every character was born. I leave a little wiggle room in deference to spec fic; you know how that goes.

Does your character's particular family celebrate birthdays? If so, how? Special foods or activities?

Are there special stories, gifts, or events associated with birthdays in general or a specific birthday?

If you're writing a book or story and get stuck, sometimes exploring a side/background issue like this can unstick you, whether you use the exploration in the story or book or not.

The Beauty of Talking Story

Talking story is one of my favorite things in the whole wide world. In case you don't know what it means in the context of writing, it means talking about stories you're writing or thinking of writing, especially if you're stuck.

For example: Suppose your main character is a waitress, but you've never been a waitress. You need her to be able to share some personal information with a co-worker, but they're both waiting tables. When could they chat?

A waitress could tell you that the boss would frown on their standing around chatting, even if the restaurant isn't busy. BUT, if the restaurant isn't busy, they would be doing side-work, like filling the salt and pepper shakers OR rolling silverware up in napkins. If they're both doing the silverware, they could talk. Or if they bring the low shakers to one location to fill them, they could talk.

If you use that, you not only achieve your requirement, you add some detail to your workplace setting and increase your authenticity.

Or you need a character to do something but don't have a motive. Chew that character over with somebody else, writer or non-writer. describe the character, time, setting, interpersonal relationships. Chances are, the other person or people will see the scene as you've created it, as a place as real as a place in the actual world you've visited. They'll understand the characters as deeply as they would an actual person they don't know but you've met and described. From that construct of reality, they may be able to tell you things you couldn't see past the blinders of Being Able To Make It So.

On this turning of the season, I wish you the ability and opportunity to talk story with other writers and/or other people.

I also recommend the Speculative Fiction Guild's GIFTS OF THE MAGI anthology, a collection of speculative fiction stories set at the turning of the year, with a wide-ranging selection of celebrations. I have a story in it, but none of us get royalties: All profits go to "Indy Reads, a not-for-profit organization that provides tutoring to illiterate and semi-literate adults."