Interview with Marian Allen, Author of the Sage Books

What is your book about?

The SAGE trilogy is about a land thrown out of balance by the selfishness of its ruler. When the most selfish of the Four Divine Animals (Tortoise) decides to stir things up and use a few chosen people to make even more of a mess, events take unexpected turns.

Who is your most unusual/most likeable character?

The most unusual character in SAGE has to be Tortoise. Sometimes he appears as a tortoise, sometimes as a man, sometimes as a cat, and sometimes as The Black Warrior, a terrifying sight on the battlefield. He can probably appear as a woman, too, but I haven’t written that story yet. As his author, I like him very much, because he was so much fun to write, but I can’t say he’s a likeable character. ~grin~

How long did it take you to write your book?

SAGE took me close to 20 years, from first glimmer to print/eBook. I kept getting agents who loved the book but wanted changes, then didn’t like their own changes or didn’t want to wait for my rewrite. I rewrote the book, start to finish, three or four times, by which time I had gutted it of most of its strangeness. My youngest daughter, who had grown up listening to the rewrites, told me to stop listening to what other people thought and trust myself. I did one more rewrite, making it exactly what I wanted it to be, and that’s the one I sold to Hydra Publications.

How much of a story do you have in mind before you start writing it?

Often it’s just a glimmer. Maybe a setting, a character, a situation, or a line of dialog. I start writing – I call it writing my way into a story – and stop to do some plotting and planning before I go on. Very rarely do I have the whole thing in mind before I start that initial writing.

Did you do any research for the book? If so, how did you do it? (searching Internet, magazines, other books, etc.)

I did a lot of research for SAGE. I read books on unicorns, on animal symbology and mythology, on English Anglo-Saxon life, and on the history of castles. Oh, and historical food and clothing. And silversmithing. One thing that really gets my goat is people who say, “It must be nice to write fantasy. You don’t have to do any research!” ~laughing~

What about your book might pique the reader’s interest?

There isn’t any swashbuckling or great feats of sorcery in SAGE, although swords are wielded and magic is present. One character says having magic is like being aware of another reality that’s as real as the one everybody else is aware of as well as being aware of everybody’s reality at the same time. I think readers will be intrigued by this feeling of the ordinary/extraordinary duality.

How do you develop and differentiate your characters?

I ask my characters questions. After the rough draft, I fill out character sheets on them, including asking them 10 random questions and letting them answer in their own voices. I find their voices become much more individual and strong as the questions proceed. Then I can do the rewrite with those voices in my head and those answers in the background.

Do you have mental list or a computer file or a spiral notebook with the ideas for or outlines of stories that you have not written but intend to one day?

I have a spiral notebook with pocket dividers filled with “bits”. For the first time this year, I did the Story A Day in May challenge, and mined that binder for all it was worth! I still have masses of material in there, though. It’s very reassuring.

What writer influenced you the most?

On the grounds that I should go back as far as possible, I have to say that Walter R. Brooks, creator of the FREDDY THE PIG detective books for kids, influenced me most. Brooks’ characters were individuals with unique points of view and different voices and strong motivations. He knew when to show and when to tell, when to telescope and when to detail, and his bit characters were as unique and memorable as the main ones, and sometimes turned up in later books. Plus, he was funny!

Who gave you the best writing advice you ever received and what was it?

Have you written any other books? 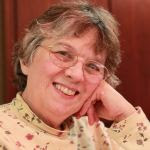 Oh, dear me, yes, thank you for asking. FORCE OF HABIT is a cop/sf/farce set on the planet Llannonn, where courtesy is mandated by law and loud-mouthed aliens from outer space – from the planet Earth, to be specific – are sure to find themselves in trouble. SIDESHOW IN THE CENTER RING is another science fiction novel, this one set on the planet Marner, where slavery is legal, and a tourist from Earth reluctantly puts more than her career on the line for someone she doesn’t even like. I’ve collected some of my short stories and self-published them for Kindle and at Smashwords.

Where can people learn more about your books?

The best place to go is my website: http://MarianAllen.com. I have excerpts of all the novels and all the short stories there, as well as a page of links to stories that are free at my site or at other sites on the web.

Thanks for the interview, Pat! I love talking about writing. :)