Final Thoughts on Word on the Street, Vancouver 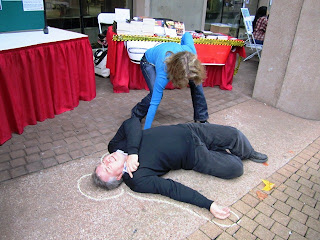 As mentioned last month, I and several others were taking part in the annual Word on the Street event in Vancouver. I wanted to give my feedback to the organizers before I followed up here. Now that this is done, I can say that, all in all, it was a great day.

I was very grateful to have a large number of volunteers help out at our Crime Writers of Canada table. They did a great job of telling people about our organization and talking about the display of books. As you’ll see from the photo, we know how to draw people in! Don Hauka thought it’d be fun to have a chalk outline in front of our table, so he volunteered to be the body, while Robin Spano drew the outline. Of course, the rain washed most of it away later.

Four of us also participated on a well-attended mystery panel called De-Mystifying the mystery. Attendees gave us great feedback, and one of them blogged about it, which you can see in the link below:

The only downside to the day was a couple of organization glitches. While it was great to be on a panel located inside the library where it was warm and dry, we had to be out of the room at a specific time to make way for the next group. To continue answering questions the attendees had, however, meant following us up the stairs and outside to the booksellers’ tent, which wasn’t a tent, but a canopy above four tables, three of which were wet from the rain. There were only two chairs for several people, and most of the attendees understandably didn’t hang around.

I would have preferred to see a table outside the room, where there was plenty of space, and discussions could easily have continued, and suggested as such on the feedback form organizers provided. I’m not sure why the fair wasn’t better prepared for bad weather, but for awhile there, some of the booths looked like there were going to be completely rained out! Still, once the sun came out again at three, so did the people, and displays survived. It can’t be easy to organize something this big, so kudos anyway to all of the volunteers who helped make it happen.

Email ThisBlogThis!Share to TwitterShare to FacebookShare to Pinterest
Labels: Crime Writers of Canada, Fatal Encryption, festivals, Taxed to Death, The Opposite of Dark, Word on the Street