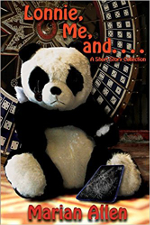 It isn't science fiction. It isn't fantasy. They don't solve crimes or have romantic adventures or think deep thoughts. Well, Lonnie hardly thinks at all, really.

I'm talking about my newly published book of short stories, LONNIE, ME, AND....

Lonnie is a natural-born fool. Tiny is the poor fool's best friend. Lonnie's wife, Leona, a hardshell Baptist, trusts Tiny to keep Lon out of trouble, but that ain't easy.

Each story is titled "Lonnie, Me, and [fill in the blank]" and is narrated by Tiny, except for the final story, when Tiny's wife has her say.

In "Lonnie, Me, and the Battle of St. Crispin's Day", the boys go back to the old neighborhood for the parish festival.

excerpt from "Lonnie, Me, and the Battle of St. Crispin's Day"
by Marian Allen
We almost made it. We were right there at the rectory gate when somebody opened the door to the parish hall and a burst of music came out.

“Dancing!” Lonnie shouted. He faked a little tap routine. “Gotta dance! Gotta dance!” He tossed the panda into my arms and loped away from us.

Drinking and gambling and dancing. Leona was purely gonna kill me!

I’m big, but I’m not that fast, and Father Dan couldn’t but waddle. By the time we got into the hall,
Lonnie had worked his way into the crowd and cut in on a guy who didn’t look all too happy about it. The woman he was dancing with was laughing.

“Are you kidding me? He’s in here two seconds, after twenty years away, and he zeroes in on Jackie the Kipper?”

Jacob deKueper, his real name was, but he was “Jackie the Kipper” to us boys, and his big brother, Pete, was “Dutch”.

Danny was sweating, and not just from the heat of the parish hall.

“I didn’t realize the deKuepers would be here. I haven’t seen any of them around for over five years.
Jackie must have gotten time off for good behavior.”

“Isn’t that Yvonne Hargrove Lonnie cut in on?”

“She married the Kipper?”

“This just gets better and better.” I craned around, lookingfor somebody my size but uglier and meaner.

“Surely Dutch won’t be here.” Danny ran a finger around the inside of his dog collar, then made a twitchy gesture that looked an awful lot like the sign of the cross. “Dutch is still wanted for his part in the hold-up that got Jackie put away.”

“I’m gonna go peel Lonnie off that handful of trouble he’s dancing with and get going. Thanks for the good time, old pal. If I ever invite you over to my place, take my advice and don’t come.”

“Sorry, Tiny.” His voice faded behind me as I plowed through the dancers.

from Amazon in print and for Kindle and Kindle apps
from an independent bookseller, like through Indiebound.

Email ThisBlogThis!Share to TwitterShare to FacebookShare to Pinterest
Labels: humor