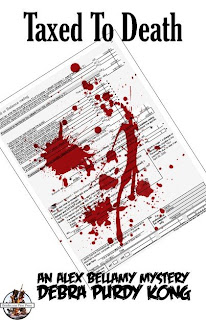 After years of writing my first novel, Taxed to Death, and obtaining great feedback from an agent, I decided to send the manuscript to an editor for a final copy edit. The editor did a good job, but her last question caught me completely off guard. “Have you contacted Revenue Canada (now called Revenue Canada Agency) about using them in your book?”

As a neophyte, I hadn’t even thought about it, but the question worried me enough to seek a legal opinion. The lawyer said that since Revenue Canada is a real institution and I had two main characters employed there, I needed Revenue Canada’s permission to publish the book, otherwise they had the legal right to prevent publication.

With trepidation, I contacted Revenue Canada’s public relations department and explained that I was a mystery writer who’d written a novel involving R.C. and was wondering if I could use Revenue Canada in my book? The woman on the other end of the line paused before saying, “We’ve never had anyone ask us this before.” No kidding. She told me she’d have to check with head office, meaning Ottawa. I really began to worry. What if they said no and shut down years of work right there?

Within twenty-four hours, the public relations woman informed me that headquarters wanted a plot outline of the book and the names of my R.C. characters to run through a database. They needed to know if characters’ names matched real employees, past and present, across the country. If they did, I’d have to change my names. Taxed to Death is contemporary and set in Vancouver, but it didn’t matter to Ottawa. If my characters’ names matched a Nova Scotia employee who’d been employed with R.C. twenty years earlier, I’d still have to make changes. My characters’ names are Alex Bellamy and Kelly Faust. Revenue Canada employs a lot of people so, needless to say, I began to panic.

A few days later, I received a letter from Revenue Canada. To my relief and amazement, they found no match between real and fictional names, and I had permission to use Revenue Canada in the book. They also wished me luck and, to this day, I’m grateful. But neither will I use a real institution again without making a few phone calls first.

And now, at long last, I'm happy to announce that my publisher has just released the electronic version of Taxed to Death on Mobipocket and Kindle. The cover showing blood on a stack of tax forms is so fitting that I wish I'd thought of it with the print edition!
If you'd like to read excerpts of Taxed to Death or Fatal Encryption, please visit www.debrapurdykong.com
Posted by Debra Purdy Kong at 7:29 PM

Debra, better to have CRA looking out for you than on the look out for you. Nice play. And very good advice.