About Taxed to Death 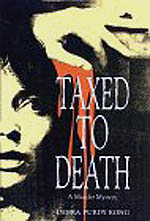 In my introductory post back in October, I mentioned my publication credits, including my Vancouver-based mystery, Taxed to Death, but I didn't talk about the book. So, maybe it's time to do this. The novel was written a few years ago, and the long-awaited sequel, Fatal Encryption, will be released in early 2008.
Taxed to Death is the story of a young, Revenue Canada auditor who stumbles into his first case of fraud. But when his colleage is murdered and Alex learns that someone inside Revenue Canada might be involved, he needs to find the killer before he too is murdered. Alex is forced to turn to secretary Jillian Scott for help; a lady he's never met and who has her own frightening reasons for refusing to cooperate. Soon, Jillian's fears and Alex's search for a killer embroil them in a bizarre and disturbing nightmare not everyone will survive. Reviewers say:
"Once I picked it up I couldn't put it down until I was done". George Robertson, Beyond Numbers.
"Taxed to Death is superb mystery of plot twists and turns. A masterpiece of suspenseful storytelling." Jim Cox, Midwest Review
"Purdy Kong does not hold back from taking a look into people's interior and private lives and that's a qualty which will take her far. Her writing is clean, capable, even poetic. Purdy Kong has found her voice." Edgar award winner, G. Miki Hayden, author of Writing the Mystery.
For anyone interested in reading the opening chapter, visit www.debrapurdykong.com
I'll add opening chapters of Fatal Encryption to the website in a few weeks, and talk more about this book once the chapters are posted.
Posted by Debra Purdy Kong at 2:38 PM