Looking For a Break From Those Pesky Tax Forms? 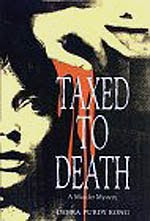 Now that tax season is almost here, I should probably plug my first Alex Bellamy mystery, Taxed to Death. This book was originally published in 1995 when Revenue Canada Agency was simply known as Revenue Canada. But as far as fraud and murder go, not much has changed over the years. Here’s the blurb:
Revenue Canada auditor, Alex Bellamy, has always dreamed of adventure. During a field audit, he discovers evidence of fraud. Alex learns that others, including someone inside Revenue Canada, are involved. He persuades his colleague, Andy Gowan, to help him investigate; but Andy is murdered and Alex is forced to turn to Jillian Scott; a lady he’s never met, and who has her own frightening reasons for refusing to cooperate. Soon, Jillian’s fears and Alex’s search for a killer embroil them in a bizarre and disturbing nightmare not everyone will survive.

“Once I picked it up I couldn’t put it down until I was done.” George Robertson, Beyond Numbers

“Taxed to Death is a superb mystery of plot twists and turns. A masterpiece of suspenseful storytelling.” Jim Cox, Midwest Review

“Purdy Kong does not hold back from taking a look into people’s interior and private lives, and that’s a quality which will take her far. Her writing is clean, capable, even poetic. Purdy Kong has found her voice.” Edgar award winner, G. Miki Hayden, author of Writing the Mystery.

“Debra Purdy Kong provides the audience with an entertaining mystery that will gain her many fans who will relish the British Columbia setting.” Harriet Klausner